The history of tolling in South Africa goes back a long way – as far back as the 18th century – and even then, the funds raised in this manner were used to build, repair and maintain roads – of which there were not too many during the early colonisation of the Cape by the Dutch.

Then, as now, the concept of tolling was not universally popular, often because the populace simply did not and does not understand why such a funding route has to be taken. But communication on tolling in South Africa has improved significantly in the recent past, as was acknowledged in Parliament. 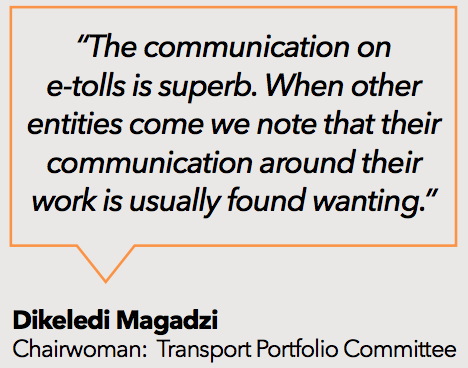 Different from the approach in many other countries where private initiative stepped into the breach, tolls were erected by the government – initially by the governor of the Cape and much later in the 19th century in the then Natal and Free State.

The best known of the tolls were in the old Transvaal in the 1890s. Its origins were partly due to an attempt to control the trade traffic coming in from Natal and the Cape and to use the income to improve the rather rudimentary roads and bridges in the then independent Transvaal.

But it had a chequered history. There was so much opposition – from the colonial governments, local traders and ordinary people – that the first tolls only lasted from November 1891 to August 1892.

Tolling commenced again at the end of October 1894 but was finally scrapped in December 1896.
The first modern toll was established in the Tsitsikamma between the Crags and Storms River in 1983.

Construction of the road had started in 1980, funded by the then National Road Fund (NRF) but because of the latter’s financial difficulties, experienced from the late 70s, it was decided to charge a toll for the use of the road in order to raise revenue to repay the NRF.

In the 21st century, tolls came into much wider use – not only on national roads but also at Chapmans Peak in Cape Town and the Huguenot Tunnel on the N1 northwards of the Mother City.

Tolls are now mostly on national roads, constituting just over 14 percent of the network. Road users typically get to a toll plaza, stop and pay using cash or a credit card. This is the manual way of paying tolls and is the case with everything manual, it can be time-consuming. There is another more modern and efficient method called e-tolling. With this method, the road user does not stop at a toll point but travels at normal highway speed and the transaction takes place electronically. That is the method that operates in Gauteng.

Tolls accelerate the availability of funding because capital can be accessed from the markets instead of waiting for public coffers to get filled first, which can be a long process in itself. Also, there is no guarantee that once the money is available in the fiscus it will necessarily be used for roads.

There could be other priorities. Thus, tolling makes it possible for roads to be available sooner and means that repairs and maintenance on these roads will be funded by the tolls.

As the pressure on the national budget to increase social spending grows, so will tolls as a funding model also have to grow.