The country’s national road agency does not only handle massive construction projects. It also assists communities which live along its roads, creates jobs and boosts SMMEs.

It also is happy to be involved in smaller projects – but which have huge advantages for local people, such as in Madidi which is in the Madibeng Local Municipality.

Some time ago a local ward councillor (Suzan Nthangeni) approached SANRAL for assistance to upgrade a six kilometre stretch of gravel road, which is Madidi’s main entry and exit route. The road had deteriorated to such an extent that taxis, buses and delivery vehicles refused to use it, forcing residents to walk long distances in order to leave or enter the area.

SANRAL decided to assist as part of its policy to support job creation and community development.

It reached agreement with the North West province to re-lay the road with an asphalt surface at a cost of R30 million, with the province and SANRAL each contributing R15 million.

The partners identified 13 local contractors and put them through an accredited business training course. They were then registered as start-up contractors by the Construction Industry Development Board.

Supervisors were identified and trained, and about 600 local people were trained as road construction workers.

The opportunity created jobs for two years and the local economy was boosted. Public transport improved significantly and new taxis were purchased, car wash businesses were opened and other businesses started to thrive. Above all, contractors in the area were empowered with road construction skills.

The road was of officially handed to the community on 14 October 2011, where learner contractors were also given competency certificates. 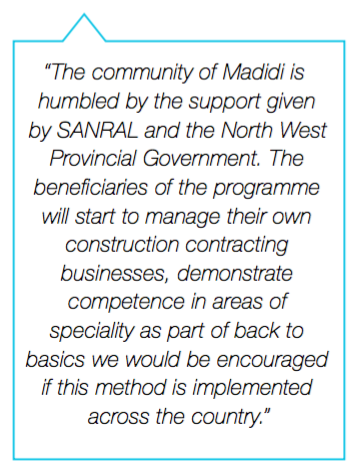 The new road has brought significant benefits to the community. Examples include:

– Development of new skills, with a few contractors managing to secure additional work. SANRAL maintains a data base with contractor details and refers these to its own national road contractors who may need to subcontract work.

– Taxis, buses and delivery vehicles now use the road, and taxis have even lowered their fares to take into account the reduced wear and tear on their vehicles.

Nthangeni, the ward councillor who initiated the project, has moved up and is now the Madibeng Municipality’s Member of Mayoral Committee (MMC) for Finance.

“SANRAL has really changed the lives of people in Madidi. We are proud to have worked with such an agency, which listens to the concerns of ordinary people and assists them. The road built by SANRAL in this village will remain its heritage and asset for many years to come.

The quality of the road itself is an indication of the efforts taken by the roads agency during its construction phase. The road has brought economic life to Madidi.

It has improved mobility, and above all, it has improved road safety in the area. Our sincere thanks to SANRAL and the North West Provincial Government for their excellent contribution in bringing about positive change in Madidi.”

SANRAL has undertaken similar projects but the Madidi road upgrade was particularly successful because of the strong provincial and local political support it received.