Road safety campaigns, scholarships, bursary programmes and information aimed at saving lives were taken to the people of Port Elizabeth by the South African National Roads Agency (SANRAL) when the agency held an outreach event at the Motherwell Shopping Centre.

The community activation, which drew large crowds, included a general overview of SANRAL projects, SANRAL’s ChekiCoast (Save a Life) road safety campaign and information on SANRAL’s scholarship and bursary programmes targeted at learners with potential and students interested in engineering. 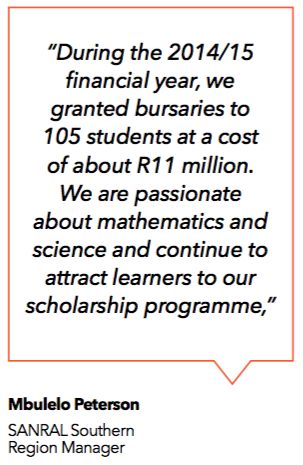 Community members were afforded the opportunity to interact with SANRAL employees who were not only there to listen but also to inform them of the bene ts they could reap from scholarship programmes offered by the state-owned entity. The SANRAL employees also informed the residents of projects which could directly and indirect bene t from the work done in and around their communities.

“Mbulelo Peterson, SANRAL Southern Region’s regional manager says SANRAL supports civil engineering students to reach their full potential. “During the 2014/15 financial year, we granted bursaries to 105 students at a cost of about R11 million. We are passionate about mathematics and science and continue to attract learners to our scholarship programme,” said Peterson.

He explained that learners who excel academically are supported from grades 10 to 12. During the past year, SANRAL awarded scholarships to 172 learners at a cost of about R2.3 million.

The objective of the project is to develop human capital and capacity in these vital subjects, especially among learners in Grades 10 to 12 in the Uitenhage and Port Elizabeth school districts.

“We hope to inspire people to become active and take charge of their futures. We went through SANRAL’s bursary programme and we are now able to sow back into the communities where we come from and this gives us a sense of pride,” said Lindokuhle Mhlangeni, an engineering intern at SANRAL (Southern Region).

The activation was broadcast live by local radio station, Nqubela FM (also known as KQFM) which gave everyone who did not attend the activation an opportunity to learn about ChekiCoast and what SANRAL offers Port Elizabeth and the rest of the Eastern Cape.

“What some people don’t know about SANRAL is the role they also play when it comes to supporting education. They support educational programmes hosted at the university (NMMU).”

Thulisa Lukwe and her mother Phunyezwa Lukwe were surprised to learn that SANRAL also offers bursaries and scholarships.

Thulisa said she was happy that SANRAL publicised the bursaries and scholarship programmes as well.

“This was a good idea to talk about what else SANRAL does besides xing roads. I am happy they have reached out to parents and told them about the bursaries and scholarships.”

Sive Pupa said although she did not have extensive knowledge of the SANRAL bursary and scholarship programmes she was aware of SANRAL roads maintenance projects.

“My mother has an SMME and she worked on road maintenance projects before. This is how I know there are people who keep an eye out on the conditions of the roads. After this community activation programme of today I will know so much more about what else SANRAL has to offer.”

Individuals who would like to gain insight on SANRAL are encouraged to visit our website here, for more information.