On 25 January 2015, SANRAL assisted the Comair/British Airways in moving a decommissioned aircraft across a major highway.

The aircraft needed to be moved to the Comair/British Airways training centre where it will be used to train cabin crews in a true-to-life environment. Traffic was disrupted on the R21 for the period of the move between 22h00 on Saturday to 10h00 on Sunday.

The plane, and the rigging equipment, weighed 32 tons and four cranes, a 100 tonne, 200 tonne, 400 tonne and 500 tonne, were required to make the move. The move required closed lanes and the highway was narrowed by lane closures to accommodate the equipment and people needed for the move. At the time the aircraft was being lifted over the highway by a series of cranes, traffic was stopped for approximately 30-40 minutes on three occasions. 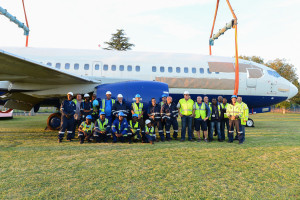 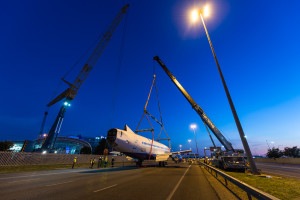 Capt. Glen Warden of Comair said that this is the first time this has been done in this country. To move an entire aircraft across a national highway is a mammoth task. He commended SANRAL for its fantastic assistance in managing the traffic on the roads.

SANRAL closed lanes in a planned sequence so as not to disrupt motorists too much, get the plane across the highway and keep road users safe. Regional manager of the Northern region, Ismail Essa, said the operation was an unusual one but they ensured that road users’ safety was priority, and that traffic was not disrupted.

He also said there have only been three moves of such done worldwide as far as they know. This was part of SANRAL’s contribution to keep the economy moving.