On September 10 the first e-toll evader was convicted in the Pretoria Magistrate’s Court.

Biochemist Dr Stoyen Stoychev was convicted of fraud (the falsification of number plates) and evading e-tolls – cited as a contravention of Section 27 of the SANRAL Act. It is important to note that there were two sentences handed down by the court – one for fraud and the other for non-payment of e-tolls.

For non-payment of e-tolls, Stoychev was sentenced to a R20 000 fine or six months imprisonment and ordered to pay all his toll bills (of more than R14 000). For the fraud charge, he got 100 hours of community service, a 12-month jail term suspended for five years on condition that he is not caught committing fraud again, and another R20 000 fine or six months imprisonment. 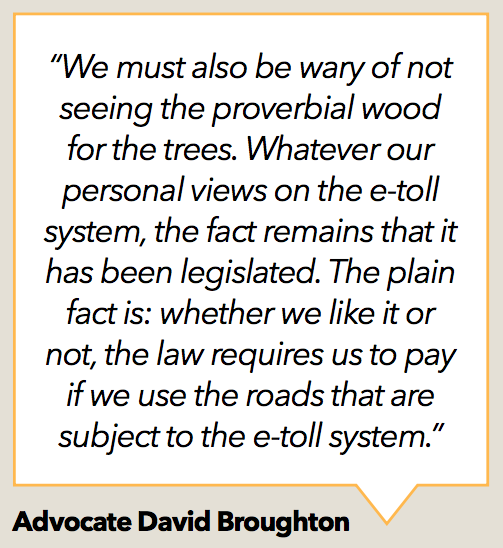 Stoychev pleaded guilty to one charge of fraud and 987 counts of evading the payment of e-tolls. He was arrested on the 2nd of October 2014 after it was found that he had been driving on Gauteng’s tolled highways with fraudulent number plates on his white Hyundai over the preceding seven months.
Pretoria’s Chief Magistrate, Desmond Nair presided over the matter, ruled that failure to pay e-toll fees was not only a crime but that SANRAL was affected because “as a direct consequence of his (Stoychev’s) actions, the agency suffered prejudice”.

“Mr Stoychev carefully planned these crimes. The crime of fraud, in particular, required presence of mind. He removed the license numbers, changed registration plates, used that vehicle to avoid detection. So, what visits my mind is that an individual – highly intelligent as he is, holding a doctorate – resorts to that level of criminality to avoid detection, makes this a very serious offence.”

This case was brought to a court of law after following the due process, which involved the South African Police investigating the matter and the National Prosecuting Authority appointing a senior advocate to prosecute. 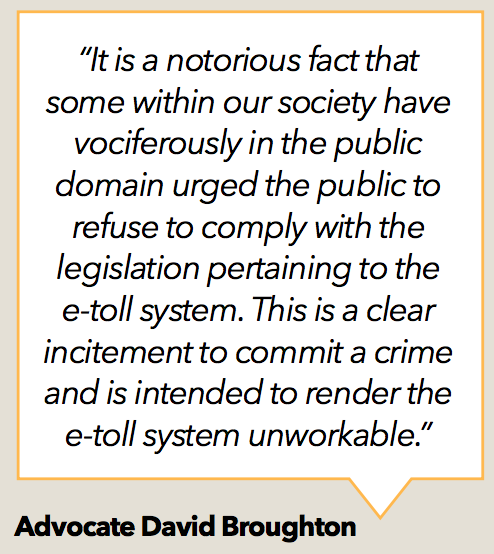 Advocate David Broughton noted during the trial of Dr Stoychev:

“We must also be wary of not seeing the proverbial wood for the trees. Whatever our personal views on the e-toll system, the fact remains that it has been legislated. The plain fact is: whether we like it or not, the law requires us to pay if we use the roads that are subject to the e-toll system.”

Now, there are some who argue that e-tolling is illegal, but they have never sought to test this assertion with our courts – which are duly empowered to pronounce on the legality or otherwise of our laws.

Advocate Broughton reminded the court that we live in a constitutional democracy. One of the founding provisions of our Constitution is that South Africa is a democratic state founded on various fundamental values, including the ‘supremacy of the constitution and the rule of law’.

Adv Broughton stressed the latter during his address on sentence when he argued against those who select which rule of the law to follow:

“It is a notorious fact that some within our society have vociferously in the public domain urged the public to refuse to comply with the legislation pertaining to the e-toll system. This is a clear incitement to commit a crime and is intended to render the e-toll system unworkable.”

This matter is a clear indication that we live in a constitutional democracy and that if citizens do not follow the rule of law they will face legal consequences. Critically, there has to be an appreciation that the rule of law requires of government and its agents as well as individual citizens and private entities to be accountable under law.

At the heart of the rule of law as a basic tenet of democracy is the idea that free people are ruled by law and not by the arbitrary views or powers of man. The day the rule of law is made an option rather a societal obligation, the day its erosion will begin. Unfortunately, to reverse that erosion is more difficult than the relative ease with which the rule of law can be undermined.

In our reaction to the Stoychev judgment, our actions and pronouncements can and should be evaluated to determine whether they advance the rule of law or do not.