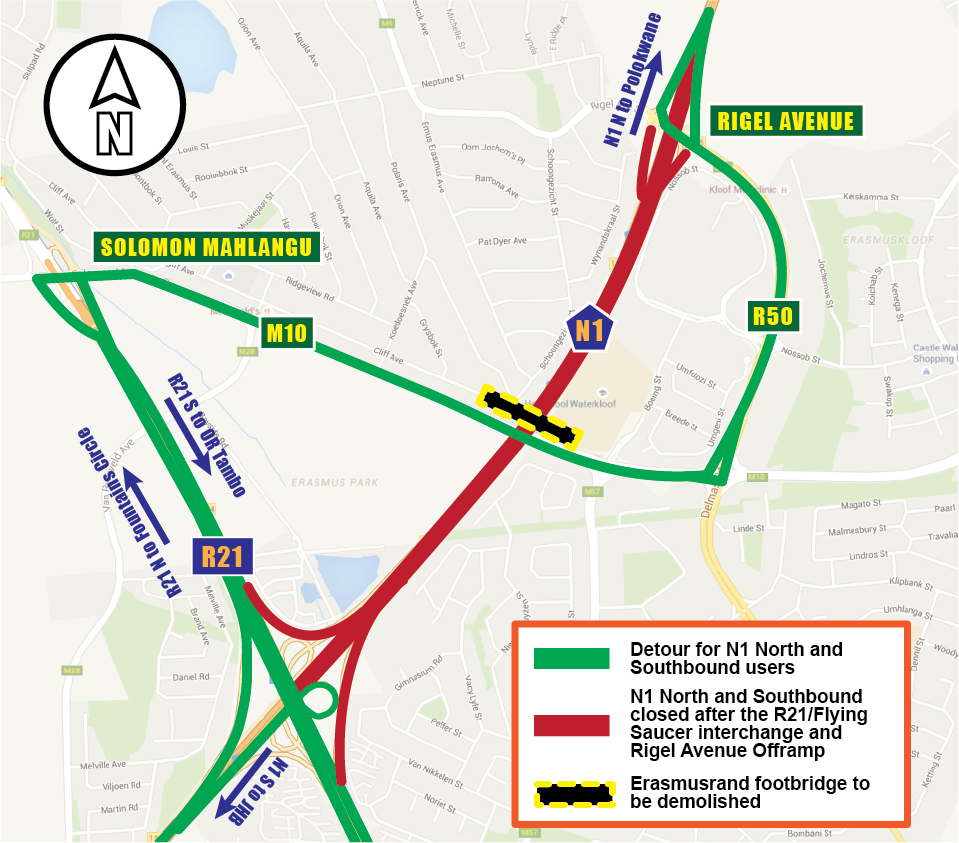 The South African National Roads Agency (SOC) Ltd (SANRAL) reminds road users that a section of the N1 freeway in Pretoria East from Rigel Avenue to the R21 Flying Saucer Interchange will be closed from 21h00 on Saturday 21 May until 09h00 on Sunday 22 May 2016. This closure is as a result of the scheduled demolition of the Erasmusrand Pedestrian bridge, which was severely damaged in 2015.

Concerns about the stability of the bridge resulted in its closure to pedestrians. SANRAL then immediately organised a temporary, safe alternative route for pedestrians and cyclists to make use of the adjacent Solomon Mahlangu Bridge. A contractor was appointed to install supporting infrastructure, to ensure that the bridge would remain stable. The bridge has been constantly monitored by a team of engineers appointed by SANRAL to ensure that it remained stable and that public safety was not compromised. Unfortunately, the engineers have determined that the bridge is too badly damaged to be repaired cost effectively, and now needs to be demolished to make way for the construction of a new bridge.

The purpose of the road closure is to ensure the safety of all road users during the demolition process.

The process will commence at 21h00 on Saturday 21 May, when 2 lanes of both the North- and Southbound lanes of the N1 will be partially closed for a period of 2 hours. This will allow the set-up of the lifting cranes. The freeway will then be totally closed in both directions from 23h00. It is anticipated that the full closure will need to continue until 07h00 on Sunday, 22 May, after which both carriageways will be partially opened (2 lanes will remain closed for 2 hours to allow de-establishment of the cranes) and normal traffic flow is expected to be re-established from 09h00.

To ensure proper traffic management and oversight, SANRAL will be supported by the Tshwane Metropolitan Police to assist with traffic flow on all affected intersections along the chosen detour. Road users are requested to fully co-operate with traffic officers to ensure a smooth and safe demolition process.

Traffic from the N1 will be diverted via the R21, Solomon Mahlangu Drive (M10) and the M9/R50 Delmas Road/Rigel Avenue roads. The entire detour route will be well sign-posted. As a safety precaution, all residents are advised to avoid the area in the vicinity of the bridge, as the activities associated with demolition of the bridge are regarded as high risk.

All road users, particularly heavily loaded vehicles and freight haulers are asked to avoid this route entirely during this period. Alternative routes such as the R21 and the N14 may be used to avoid this closure.

According to SANRAL Project Manager Alan Agaienz, the roads agency chose the best, safest and fastest demolition method, so as to minimise the potential impact on road users, the environment, neighbouring residents etc.

“We request residents in that area to be patient with SANRAL during this period and to not be alarmed when they hear occasional noise coming from the demolition site. SANRAL have appointed a highly skilled contractor who has carried out many similar demolition projects in the past, and we are confident that this intricate operation will proceed safely and successfully. The whole operation has been meticulously planned by our experienced engineers, and the safety of everyone has been our top priority during the planning process”, said Agaienz.

He said SANRAL chose to complete the demolition during an off-peak period on a weekend in order to have minimal impact on traffic flow, and also to ensure the safety of all road users.

SANRAL has notified residents who will be directly affected by the demolition.

Any questions related to this project may be directed pressoffice@nra.co.za or by calling 083 283 6089.