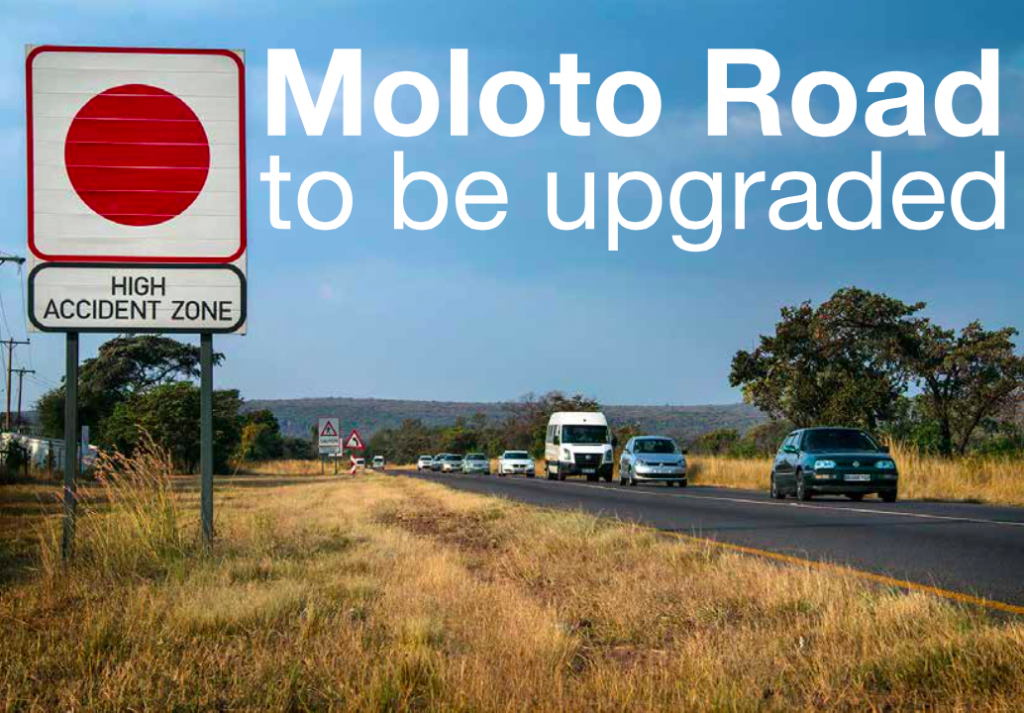 Major construction work to completely overhaul the R573 Moloto Road will soon be undertaken by the South African National Roads (SOC) Limited (SANRAL) in August 2016. This was announced by Transport Minister Dipuo Peters during a sod-turning ceremony at Kwa-Mhlanga.

The Minister, together with top officials from the roads agency, visited the Nkangala District in Mpumalanga as part of an ongoing outreach programme to engage with stakeholders living along the Moloto Road. However, the engagement was an assurance by the Minister and SANRAL that real construction work to upgrade and modernise the road would commence in August this year.

The road, which has been dubbed the “road of death” due to the high number of accidents that have happened on it over the years, was incorporated into the SANRAL road network on 3 August 2015 by the Department of Transport. An amount of R1 billion was allocated for the upgrade over a three-year period.

The 160km stretch of the Moloto Road runs through the provinces of Gauteng, Mpumalanga and Limpopo, and is used by close to 60 000 commuters on a daily basis. The road has not been upgraded for many years and has had to cope with increasing traffic in recent years. Statistics taken from a period of 29 months – January 2012 to May 2014 – show that there were 489 crashes on Moloto Road, resulting in 158 fatalities and 594 serious injuries.

Speaking at the event, Ms Peters promised the community that once completed, the Moloto Road would become a symbol of more than just a safer road that enable its users to travel from one destination to another without being concerned about accidents or fatal injuries. She also said the road would also bring more economic activity to the district, enable small farmers to bring their produce to markets, be used as a route by tourists who want to visit game reserves and natural attractions in the region and facilitate the movement of people, products and services.

“I want to emphasise the fact that road projects undertaken by SANRAL across the country are always accompanied by opportunities for job creation and training that benefit the wider community. In the past financial year SANRAL allocated contracts to the value of more than R2.4-billion to emerging companies owned by black entrepreneurs, women, the youth and people with disabilities,” she said.

The Minister said the commencement of the project to upgrade the R573 was a clear demonstration of how the government had listened to the concerns raised by communities and road users about the safety of the road. “For a long time, the state of this road has been a blight on the region. The Moloto Road has become synonymous with road crashes, bus accidents, injuries, and deaths. It has robbed communities of breadwinners and beloved mothers. Parents had to stand at the open gravesites of their children. I know this all too well because as Minister of Transport I often attend the funerals of crash victims and have to respond to the unacceptable carnage on our country’s roads,” she said.

Touching on partnership agreements between the three different spheres of government, Peters said partnerships have been created between the Department of Transport, the provincial governments of Gauteng, Mpumalanga and Limpopo to realise commitments made in the Presidential Infrastructure Coordinating Commission (PICC). The Moloto Road project falls under Strategic Integrated Project 1, Unlocking the northern mineral belt with Waterberg as the catalyst.

Since incorporation, SANRAL has since started with a wide range of interventions in terms of road maintenance that includes the repairing of potholes, the cleaning of drains, the trimming of foliage on the side of the roads and the introduction of new road signs and line markings.

The modernisation of this road forms part of the Moloto Road Development Corridor, initiated by the government, which will also include the much-needed investment in passenger rail to offer commuters a safer, faster and more accessible connection between Mpumalanga and Gauteng.

Although the road will be upgraded to the same standard as other SANRAL national roads, it will not be tolled.