The “#FeesMustFall,” campaign by university students has generated much debate. That is to be welcomed and encouraged.

Like the 1976 generation, the so-called hashtag youth of today has once again reminded us not only of the imperative of the right to education but also its place in facilitating economic access and meaningful citizen participation.

With humility, one is reminded of an observation which became the mantra of the late Stan Nkosi (my husband) that “Africa will not be free until education, economic freedom and moral regeneration is prioritised”. 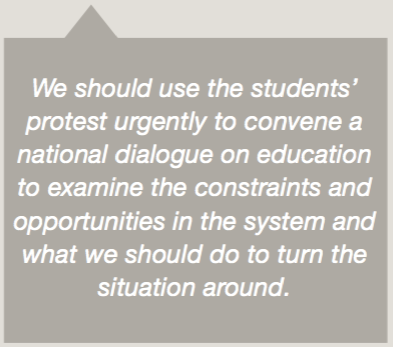 In the area of education, it should be possible to explore consensus on a package of measures to broaden access so as to facilitate the potential of all our people.

The starting point should be a discussion among the leadership of the key stakeholders on the strategic importance of education in the achievement of our national development goals as articulated in the National Development Plan (NDP).

SANRAL already takes the approach seriously in its programmes to enhance educational possibilities for students and learners, especially in the eld of science and mathematics.

We should use the students’ protest urgently to convene a national dialogue on education to examine the constraints and opportunities in the system and what we should do to turn the situation around.

It should concern us that while government currently spends an estimated R203 468 billion on basic education, with the figure projected to rise to roughly R640 billion in the next three years, our return on the investment is still less than satisfactory.

Before 1994, we used to talk about the vital need for the rekindling and promotion of a culture of learning and teaching, which was asphyxiated by decades of the system of Bantu education. 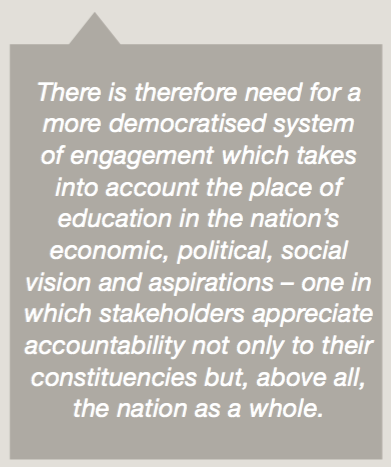 Today, that discussion has disappeared from the national discourse. One consequence of this is that it is taken for granted that the culture has been rekindled over the years, which might be partially correct if not entirely erroneous.

The poor literacy and numeracy performance of learners registered over the years in Annual National Assessments are indicative of serious shortcomings that suggest a national crisis in education.

The Basic Education Minister Angie Motshekga revealed that the Diagnostic Report affected to examine the tests revealed that “in some cases,” the difficulties experienced by learners “were the result of ineffective teaching methods”. However, the poor performance of learners at critical stages like those in the senior phase might suggest that the “ineffective teaching methods” might be more widespread than we think.

The assessments, as indeed other elements of education, cannot be left to the department and teachers’ unions alone. They are a national concern that requires the attention of all stakeholders including parents, learners themselves, business and education specialists.

It is also clear that the current system of engagement by stakeholders within the sector does not bode well for consensus promotion and might inadvertently reduce the capacity to reach national goals. For example, what happens if learners’ organised formations enter into agreements with the department which unduly disadvantage teachers or vice versa?

The recent public announcement by the Congress of South African Students which encouraged learners to respond in kind to corporal punishment meted to learners by teachers was an illustration of the absence of consensus about how to address discipline in the schooling system. This is despite the existence of government policy as reflected in law.

There is, therefore, a need for a more democratised system of engagement which takes into account the place of education in the nation’s economic, political, social vision and aspirations – one in which stakeholders appreciate accountability not only to their constituencies but, above all, the nation as a whole.

The same attitude should guide stakeholders at the apex of the education system, the tertiary level.

These and other matters could best be debated in the context of a national dialogue on education which focuses the nation’s attention singularly to the issue.

It is an initiative which the Stan and Daphne Nkosi Foundation would readily partner.