Using the fuel levy to fund South African roads is not as simple as it sounds. The whole question of how South Africa’s roads should be funded is best illustrated by using the proposed plan to toll the clogged N1 and N2 around Cape Town.

The legislation does not allow for funding of roads from sums appropriated from the Fiscus. The N1/N2 competes with all projects in the more than 18 000 km non-toll road network, including the “unfunded projects” to the value R120 billion marked as viable potential toll roads.

It will take between 10 to 20 years to fund this project from SANRAL’s annual non-toll grant from the National Treasury – currently standing at R12.5 billion per annum. Using the user-pay principle on these roads, it will facilitate loan funding of between R8 billion and R10 billion through the private sector, in order to upgrade and repair these roads in the next three years.

This will reduce congestion, improving service level transport infrastructure and save time and vehicle operating costs that will cost less than paid tariffs.

Since the 1990s, SANRAL’s non-toll allocations have not been sufficient to undertake any road expansion or new road construction projects. SANRAL received R12.5 billion in 2015/16 as a non-toll allocation from the national budget.

An additional R11.9 billion is needed per year (at 2014 prices), which is not currently allocated by the National Treasury to fund the N1/N2 Winelands toll road project and a number of major SANRAL road expansions. 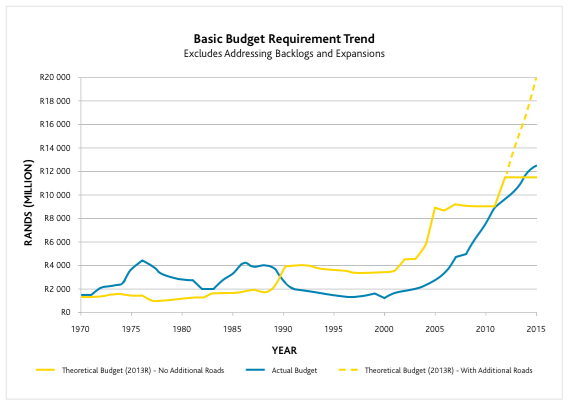 In an effort to reduce the country’s debt costs and provide an improved investment climate, the government introduced a budget ceiling which means no additional resources are allocated and any reprioritisation has to be funded from savings in other areas. Thus, tolling is the most sensible, economically viable solution.