There are two projects on important link roads in Mpumalanga near Swaziland of which one has been completed while construction on the other is ongoing.

The R570 between the N4 and Jeppe’s Reef in the Greater Nkomazi Municipal area is under construction while the R571 from the N4 to Esibayeni was completed in February 2015.

The R570 forms an important link in the national road network connecting the eastern parts of South Africa with Swaziland at the Jeppe’s Reef border post. The existing road needed urgent attention due to deterioration and a drop in levels of safety due to increasing volumes of traffic.

Safety was also a major concern and this was taken into account by providing passing lanes and climbing lanes as motorists were becoming frustrated by blockages caused by slow- moving heavy laden trucks.

Apart from the rehabilitation of pavement layers for 41 kilometres of existing road and the construction of these lanes to cater for the increase in volume of traffic, the following works will be done:

• Demolishing existing drainage culverts and installing new and wider culverts
• Installation of subsoil drains
• Widening of four bridges, replacement of joints and parapets
• New road markings, road studs, road signs and fencing
• Finishing off the road reserve
• Establishment of borrow pits and a hard rock quarry
• Landscaping and rehabilitation of grass
• Desurfacing of the road, and
• Adding of additional lanes.

“I would like to thank my partner for the opportunity given to me and the community of Buffelspruit in particular.

They have granted me the opportunity to work with them and a chance to change many lives by creating job opportunities and reducing unemployment in the community. I would also like to thank SANRAL for making all this possible”.

Stuart Tanner, Site Agent for the contractor, had only praise for Nkosi.

“Tumelo approached us when we started our establishment for the site camp on the R570 project in January 2015. We gave him a go and he produced good results, no task or operation requested of him was too big or too small. 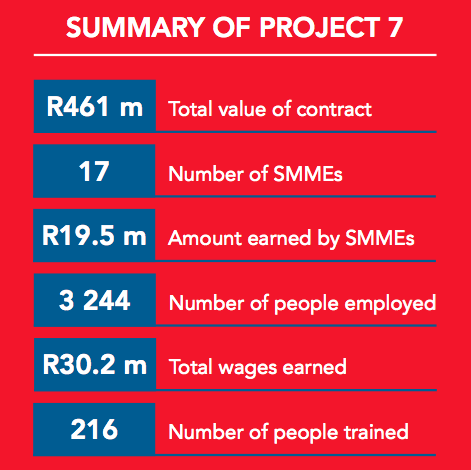 The R571 from the N4 to Esibayeni (28km) also forms an important link in the national road network and provides mobility for transport of sugar cane to the mills in the area, and for international travelers moving between Mozambique, South Africa and Swaziland.

The improvements include the partial reconstruction of pavement layers for 20km of existing road and the following: