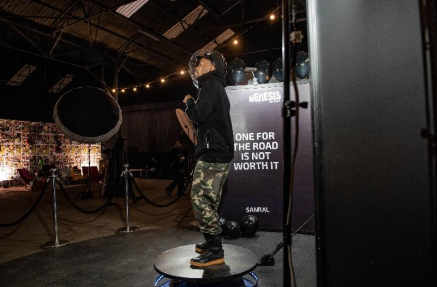 Media Release
One for the road is not worth it: SANRAL

Pretoria, 2 June 2022 – Amid the multiple horrific road accidents reported over the weekend across the country, the South African National Roads Agency SOC Ltd (SANRAL) road safety team made efforts to encourage road users to be safe on the roads.

The team partnered with the Genesis All Black event which took place at Newtown in Gauteng to encourage safety behaviour among road users, particularly when attending events where alcohol is consumed.

The key message on the evening was “One for the road is not worth it” which aimed to discourage the traditional call of having one more drink before hitting the road.

Vusi Mona, SANRAL General Manager of Communications, said the team was constantly looking for ways to promote road safety and discourage drinking and driving, and what better way to reach road users than at events.

“We must not shy away from engaging the public at these mass gatherings, because they are hot spots and often a genesis for drunk driving and reckless behaviour which can result in fatalities or loss of life,” he said.

He said unsafe behaviour, such as driving under the influence of alcohol, is the leading cause of road incidents and the roads agency continues to battle this on an ongoing basis.

Several road crashes were reported across the country over the past weekend including the deadly incident which claimed the lives of 16 people on the N3 between Peter Brown and Chatterton off-ramps in Pietermaritzburg in KwaZulu-Natal on Saturday.

Mona said road safety remained a key pillar for SANRAL, and continuous efforts will be made to save lives on South African roads.