SANRAL passed the half-way mark on the R61 Mthatha Sprigg Street to Ngqeleni project in June this year.

The project remains on schedule for delivery next year and the estimated date for completion is towards the end of 2016.

As a result of the new carriageway five new bridges, one over the Mthatha River, another over the Corana River, a pedestrian overpass bridge and a new bridge at the Ngqeleni Interchange, are currently under construction. A smaller bridge will also be constructed over the Sidwadweni River on Bernard Schultz Drive.

Through the programme, the safety of the road users and pedestrians will be improved through the closing of unsafe intersections, a new interchange at Ngqeleni turn-off and the construction of formalised and channelized intersections.

This is also an integrated road safety programme which aims to decrease the road hazards, which may lead to accidents and motor vehicle accident (MVA) related deaths.

Many accidents on the R61 between Mthatha and Ngqeleni involve motorists hitting stray animals. In fact, between December 2014 and January 2015, local traffic authorities impounded 266 stray animals including goats, cattle, sheep and donkeys.

The project has already injected a salvo of benefits to members living in villages from Mthatha to Ngqeleni.

“SANRAL has delivered 31 new replacement houses to residents whose dwellings fell under the construction footprint, and in the process replaced poorly constructed homes.”

The project has also brought meaningful initiatives of social development to residents and communities.

Training and skills development initiatives are also advancing members of the local community. Technikon students from the community are being offered an opportunity for on-site experiential training in order to obtain their diploma qualification.

The workers have been provided with, amongst others, road safety and environmental awareness training.

Ngozwana said the work is carried out in a heavily trafficked and densely populated built-up area, and within a confined construction zone involving the simultaneous construction of earthworks, structures, and the relocation of services.

“The interface between formal and traditional land tenure systems for land acquisition and relocation of communities has produced unique challenges which SANRAL solved through proper planning and continuous stakeholder engagement.”

He said the project is also part of a master plan to unlock the economic potential of the Wild Coast, opening it up for both development of tourism and other long-term mega projects in this region.

The R61 Mthatha Sprigg Street to Ngqeleni project is also one of several projects each with different starting and completion dates in a mega road infrastructure development and safety programme for the R61 which commenced in 2011, and which will be completed by 2020.

This project also links up with other programmes including the conversion of Sprigg Street and Madeira Street in Mthatha’s central business district (CBD) into one-way streets to help improve traffic flow. 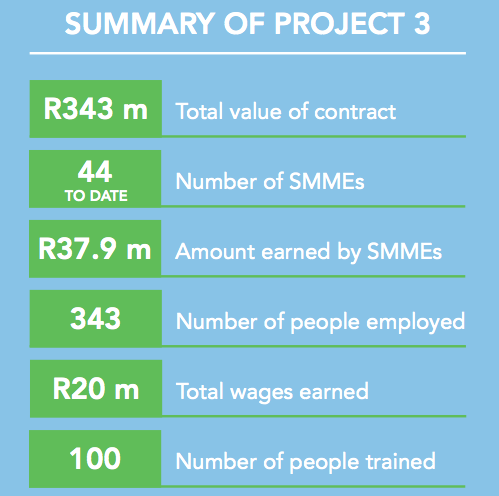